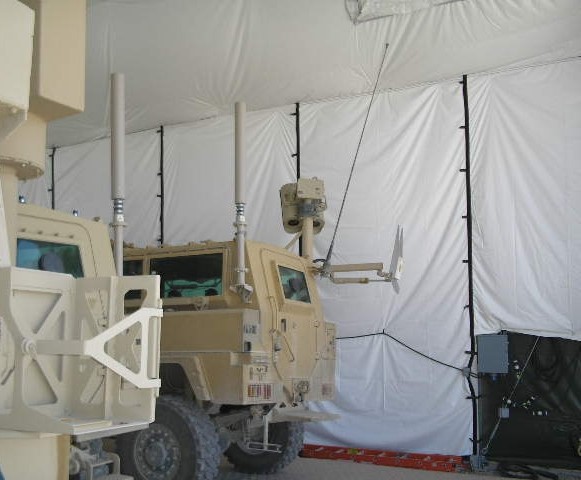 The U.S. Army worked with a key provider in national security technologies to provide heavy vehicle support in the extreme conditions of Iraq and Afghanistan.

The United States Army in Iraq and Afghanistan experienced significant damage to their heavy equipment due to extreme operating conditions and IEDs (Improvised Explosive Device). The U.S. Army worked with a leading provider in national security technologies to provide heavy vehicle support in these extreme conditions. The method called for shelters large enough for heavy equipment coverage with high access doors for mine-resistant vehicles, that can also be delivered quickly, and set up fast.

CAMSS Shelters knew the CAMSS 40EX Shelter System would be great for the job. Its ability to be transported by air in ruggedized CAMSS Medium Composite Containers, and to easily setup with no heavy equipment was ideal for the remote desert locations. To ensure a quick setup time, the CAMSS 40EX System was tested by the U.S. Army White Sands test center to setup in 2 days by a trained 8-person crew. An employee from the security firm was trained by CAMSS Shelters and traveled to Afghanistan to setup the shelter system with only himself and one local Afghan. They were pleased to have been able to install the 40 foot wide shelter on their own with no heavy equipment and only the tools provided.

The features of the 40EX Shelter combined with ease of assembly made it the best solution in remote locations for the U.S. Army.